GEOTRACES is an international collaboration project aiming to unravel the distributions of trace elements and their isotopes in the global ocean. As part of the GEOTRACES-Japan project, we carried out two surveys in the subarctic Pacific in 2012 and 2017. Here, we synthesize the outcomes of research completed so far associated with these surveys. Also, there is still a lot of work to be done in the subarctic Pacific! For example, we do not understand the processes that cause zinc-silicate decoupling in the region. The size fractionation of iron and its fate in the intermediate water also requires further study to elucidate the influence of organic matter on the transport of iron. We are also working to unravel the distributions of noble metals such as platinum and palladium. These metals are widely used in catalytic converters in vehicles and can be used as anthropogenic tracers in the ocean. 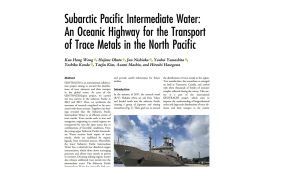